The four teats are a good variety with white body, good milk production, resistance to rough feeding, and strong disease resistance. Female goats usually weigh between 25 and 40 kg. By using the following method, the rate of one-childbirth of four-milk mother goats can be increased.
First, selecting and selecting a female lamb that has a single lamb and a few lambs to breed, in order to preserve the genetic characteristics of a litter and multiple lamb breeds, and at the same time increase the proportion of female goats of the appropriate age in the flock. Generally, 4 to 6 year old female goats should occupy sheep. 55%-60% of the total number of groups.
Second, reminding è†˜ è†˜ è†˜ è†˜ è†˜ è†˜ è†˜ è†˜ è†˜ è†˜ 1 months before mating should be short-term excellent feeding, in addition to grazing, each female goat feed 0.2-0.25 kg per day concentrates, and for their drinking a small amount of milk. Female goats of good age have good estrus, normal estrus, and increased number of ovulations, which can create conditions for increasing the odds of one birth.
Third, mating mating goats when the estrus is the main performance for the flushing of the vulva, loss of appetite, from time to time squatting, standing upset, then the vulva increased, with a sticky secretions overflow, like to approach the ram, accept the ram to climb. The estrus duration of the female goat is 24-42 hours, and ovulation is 30-34 hours after the estrus begins. The breeding time should be 12-25 hours after estrus. The female goat is of different ages and the timing of the mating is different. Oldest female goats have short estrus duration and should be bred in time after their estrus. Young female goats have long estrus, and breeding time should be slightly later. Middle-aged female goats have moderate estrus time, and mating time should be between those of old goats. Between young female goats. In general, female goats can be pregnant by mating once in 1 estrus period, but in order to increase their quasi-fetal rate and multi-rabbit rate, they should be bred twice in the middle and late stages of estrus, or in 1 estrus. At different times inside, use 2-3 rams each time. If conditional artificial insemination is better.

Fresh golden crown pears ripen from July to August and are refrigerated from November to may next year.The pear is delicious, crisp and juicy, sweet and sour, and fragrant.Rich in sugar, protein, fat, carbohydrate and a variety of vitamins, to human health has an important role.Pears have the function of clearing the lung and nourishing the lung.Golden crown pears are very delicious and we offer the best quality for our customers. Please let us know if you need any. 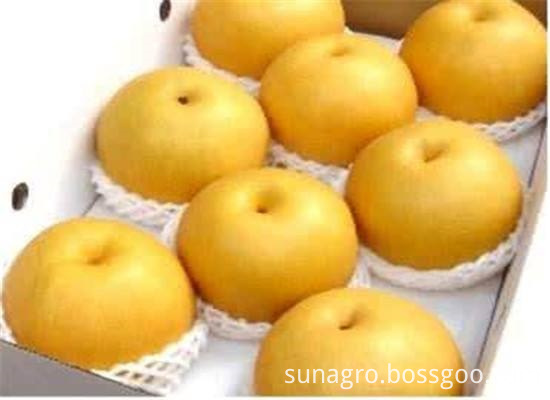